You can't ask for a better place to have your store! J.F. Kennedy, on Monaco, is one of the most luxurious spot. "Time to Sell” will be more than glad to receive a visit from you. 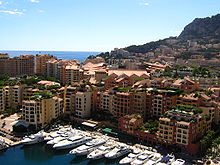 Fontvieille and its new harbour

One of Monaco's main sources of income is tourism. Each year many foreigners are attracted to its casino (where citizens are denied entry) and pleasant climate.[83][111] It has also become a major banking center, holding over €100 billion worth of funds.[112] The principality has successfully sought to diversify its economic base into services and small, high-value-added, non-polluting industries, such as cosmetics and biothermics.[105]

The state retains monopolies in numerous sectors, including tobacco and the postal service. The telephone network (Monaco Telecom) used to be fully owned by the state; it now owns only 45%, while the remaining 55% is owned by both Cable & Wireless Communications (49%) and Compagnie Monégasque de Banque (6%). It is still, however, a monopoly. Living standards are high, roughly comparable to those in prosperous French metropolitan areas.[113]

Monaco is not a member of the European Union. However, it is very closely linked via a customs union with France and, as such, its currency is the same as that of France, the euro. Before 2002, Monaco minted its own coins, the Monegasque franc. Monaco has acquired the right to mint euro coins with Monegasque designs on its national side. 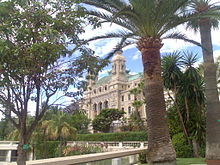 The plan for casino gambling was mooted during the reign of Florestan I in 1846. Under Louis-Philippe's petite-bourgeois regime, however, a dignitary such as the Prince of Monaco was not allowed to operate a gambling house.[17] All this changed in the dissolute Second French Empire under Napoleon III. The House of Grimaldi was in dire need of money. The towns of Menton and Roquebrune, which had been the main sources of income for the Grimaldi family for centuries, were now accustomed to a much improved standard of living and lenient taxation thanks to Sardinian intervention and clamored for financial and political concession, even for separation. The Grimaldi family hoped the newly legal industry would help alleviate the difficulties they faced, above all the crushing debt the family had incurred, but Monaco's first casino would not be ready to operate until after Charles IIIassumed the throne in 1856.

The grantee of the princely concession (licence) was unable to attract enough business to sustain the operation and, after relocating the casino several times, sold the concession to French casino magnates François and Louis Blanc for 1.7 million francs. The Blancs had already set up a highly successful casino (in fact the largest in Europe) in Bad-Homburg in the Grand Duchy of Hesse-Homburg, a small German principality comparable to Monaco, and quickly petitioned Charles III to rename a depressed seaside area known as "Les Spelegures (Den of Thieves)" to "Monte Carlo (Mount Charles)."[114] They then constructed their casino in the newly dubbed "Monte Carlo" and cleared out the area's less-than-savory elements to make the neighborhood surrounding the establishment more conducive to tourism.

The Blancs opened Le Grand Casino de Monte Carlo in 1858 and the casino benefited from the tourist traffic the newly built French railway system created.[115] Due to the combination of the casino and the railroads, Monaco finally recovered from the previous half-century of economic slump and the principality's success attracted other businesses.[116] In the years following the casino's opening, Monaco founded its Oceanographic Museum and the Monte Carlo Opera House, 46 hotels were built and the number of jewelers operating in Monaco increased by nearly five-fold. By 1869, the casino was making such a vast sum of money that the principality could afford to end tax collection from the Monegasques — a master stroke that was to attract affluent residents from all over Europe.

Today, Société des bains de mer de Monaco, which owns Le Grand Casino, still operates in the original building that the Blancs constructed and has since been joined by several other casinos, including the Le Casino Café de Paris, the Monte Carlo Sporting Club & Casino and the Sun Casino. The most recent addition in Monte Carlo is the Monte Carlo Bay Casino, which sits on 4 hectares of the Mediterranean Sea and, among other things, offers 145 slot machines, all equipped with "ticket-in, ticket-out" (TITO); it is the first Mediterranean casino to use this technology.[117]

Pick a start point to plan a route to Monaco Souvenirs property and know, see and feel real distances, time travel and directions on real time, through real places, with accurate precision !

Need some help Go 'walkies', through the pedestrian paths & sidewalk routes, between this Map Marker and Monaco Souvenirs property!

Once chosen, just press the 'Route' icon, on your Map Marker, and we'll be more than pleased to draw, on the Map, all possible directions, via bicycle paths & preferred streets, between this Map Marker and Monaco Souvenirs Property!

Don't worry! You still can know the surroundings of the Monaco Souvenirs Real Estate!
You can always pick another Map point/Marker or come here and change your travel mode to any other transport means.

From this Marker on, I want to arrive to Monaco Souvenirs destination in

We will show you several options, from this Map Marker to Monaco Souvenirs property way, including transportation time-tables, which parts are to be done walking, when and where do you exchange to bus mode, or to a subway, a train, rail, etc.

Other properties from this Agent?