Nice apartment to sale, very near center of Lisbon with transportation facilities. Price has been reduced.

Amadora (Portuguese pronunciation: [ɐmɐˈðoɾɐ]) is a municipality and urbanized city in the northwest of the Lisbon Metropolitan Area. The population in 2011 was 175,136,[1] in an area of 23.78 km².[2] It is the most densely populated municipality in Portugal.

The Aqueduto das Águas Livres, which brings water from the Sintra hills to Lisbon, and stretches 30 kilometres (19 mi), was finished in the 1770s and includes the largest masonry arch ever built, located in Campolide — the local coat of arms also displays the aqueduct (like others along its way).

At the request of its population, in 1907, a decree issued during King Carlos I reign, merged the communities of Porcalhota, Amadora and Venteira into one town named Amadora.

At the present time Amadora does not have any airfield. However, in the 1920s a small airfield (the first in Portugal) was located here. The first flight from Portugal to Brazil left from Amadora. The Captain of the airplane was Adm. Gago Coutinho, a well known Portuguese celebrity.

The municipality was formed on 11 September 1979, when it ceased being a parish of the municipality of Oeiras. Few days later, on 17 September, Amadora was granted city status.

The former Sorefame railway rolling stock factory was located in Amadora, but was closed in 2004. Most of the carriages for Portuguese Railways built during the second half of the 20th century were constructed here. 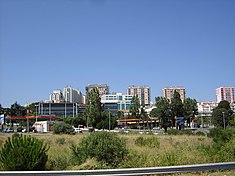 Apartment blocks in the parish of Alfragide

A typical street in the urbanized city of Amadora

One of the largest urban communities in Portugal, Amadora forms a conurbation with Lisbon, sharing the same subway, bus and train networks. It is dominated by large apartment blocks, commercial parks, industrial areas and some headquarters of international companies.

Administratively, the municipality is divided into 6 civil parishes (freguesias):[3]

Despite being essentially a residential city, Amadora has commercial zones, industries and headquarters of international companies operating in Portugal.

As commercial zones, it has IKEA, Decathlon, Alegro, Continente and Dolce Vita Tejo (one of the biggest shopping malls in Europe). Siemens and Roche are examples of international companies based in Amadora.

Amadora's public transport network is extremely far-reaching and reliable, being fully integrated with the transportation network of the Lisbon Metropolitan Area. It has 2 metrostations, the commuter Sintra train line with 3 stations, 2 bus services (Vimeca and Carris) and 4 motorways around the city (2ª Circular, CRIL, CREL and IC-16).

Pick a start point to plan a route to T2 Amadora (T2) property and know, see and feel real distances, time travel and directions on real time, through real places, with accurate precision !

Need some help Go 'walkies', through the pedestrian paths & sidewalk routes, between this Map Marker and T2 Amadora (T2) property!

Once chosen, just press the 'Route' icon, on your Map Marker, and we'll be more than pleased to draw, on the Map, all possible directions, via bicycle paths & preferred streets, between this Map Marker and T2 Amadora (T2) Property!

Don't worry! You still can know the surroundings of the T2 Amadora (T2) Real Estate!
You can always pick another Map point/Marker or come here and change your travel mode to any other transport means.

From this Marker on, I want to arrive to T2 Amadora (T2) destination in

We will show you several options, from this Map Marker to T2 Amadora (T2) property way, including transportation time-tables, which parts are to be done walking, when and where do you exchange to bus mode, or to a subway, a train, rail, etc.

Do you know you can actually BUY and CUSTOMIZE the entire Miles-NET platform?
YES!
Here: http://www.Miles-NET.com